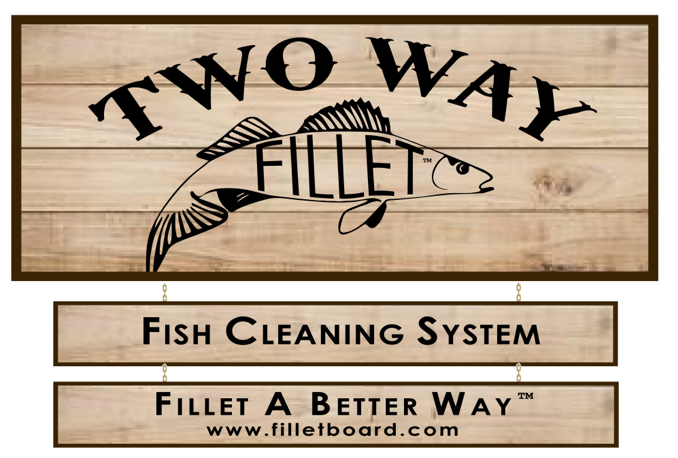 One of the biggest decisions that all anglers face in the fishing world is whether or not to keep or release whatever species of fish they are pursuing.  Some anglers love to eat fish but are unsure about their abilities to fillet fish.  These anglers usually are concerned about keeping the fish from slipping off their fillet board, injuring their fingers or hand from sharp gill plates, or the sharp teeth in some fish’s mouths that prevent them from inserting their thumb.  Well, those struggles are solved by the new product that K&J Outdoor Products has introduced for all anglers.  The newly patented product that solves these issues is the TWO WAY FILLET® fish cleaning system.  This new fillet board system has been designed and tested with the 21st Century angler in mind.  After 10 years of research and development and several prototypes this product is now ready for the market.  It has been designed specially to help anglers FILLET A BETTER WAY®.

TWO WAY FILLET® is fast, safe, and accurate. This fish cleaning system makes all individuals look like a pro while filleting their catch of the day.  This was designed for the beginner to the most experienced angler. The main feature that makes this fillet board advanced and superior to all other fillet boards is its unique clamping system.  This clamping method helps hold the fish to the board allowing the angler to have both hands free to fillet the fish the way he or she likes too.  We sometimes call the clamp the third hand because it is literally like having a third hand while you are filleting.  The clamp creates an anchor point against which you cut through flesh and bones.

The clamp also ends the above struggle of the angler having to put his or her thumb in the fish’s mouth to hold the fish on the board.  With the clamp in the mouth of some species we have actually see the fish relax or showing signs of being paralyzed due to the clamp suppressing on the fish’s tongue.  Again the clamp solves the angler’s struggles of keeping the fish on the board.  Having the clamp secure to the board keeps the fish on the board and reduces the fish from flopping and injuring the angler.   If the angler is finished with one side and he or she needs to do the other side they just pull up on the clamp and flip it over and secure it back into the board. This reduces the chance for the fish to fall or flop off the board.  One last example in how the clamp allows the fish to stay anchored is if the fish is too long for the board.  The angler is able to pull up on the clamp while the fish is still anchored to the clamp and pull the fillet that needs the skin taken off onto the board. Then the angler continues to hold the clamp which creates resistance so that they angler is able to finish the job while maintaining control over the fish.  The examples above are just a few ways this board can change the way anglers can become faster, safer, and more accurate when it comes to filleting fish.  So go out there and FILLET A BETTER WAY®.